Jeffrey wrote to Eric Zimmerman to ask what stood out for him about that interview. Zimmerman replied, ‘What I remember about that conversation is that I felt like Dorothy in the Emerald City – standing before a giant head like the Wizard before he comes out from behind the curtain. I remember loving some things he said (something about how life is shit but games can help us forget that from time to time) and also disagreeing with him on other points. For example, he suggested that game designers will perfect their craft once we know how the brain works, and I countered that knowing about cognitive science wouldn’t help a filmmaker make a better movie.’ 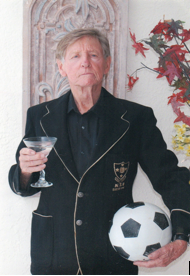 On March 7, 2015 psychology lost one of its brightest lights. Brian Sutton-Smith, who was born in Wellington, New Zealand, in 1924 died at a care home in Vermont. The cause of death was listed as complications from Alzheimer’s disease. Brian is predeceased by his wife Shirley and son Mark. He is survived by his longtime companion Deborah Thurber, and daughters Katherine (Moyer), Leslie (Blackman), Mary (Tucker), and Emily (Lepard).

During his long, productive life Brian became one of the most influential play theorists of the past 150 years, a list that includes Karl Groos, Johan Huizinga, Jean Piaget, Roger Caillois, and Erik Erikson. Brian published more than 350 articles and about 50 books, many of them indispensible to anyone interested in play, games, and children’s folklore, particularly The study of games (1971), Toys as culture (1986), and The ambiguity of play (1997). His theories of play are not restricted to playground games or traditional toys but are also influential in the field of video game studies. Until he was no longer able to do so, Brian was working on a book relating his rhetorics of play to Antonio Damasio’s typology of emotions, some determined by culture, and others through biology. Both are necessary for explaining the variety of toys and types of play. There are plans for the book to be completed by Brian’s friend and colleague Fraser Brown, with help from other colleagues.

Brian’s career began as a teacher in Wellington, New Zealand. He was immediately struck by the contrast between the stories that New Zealand children were required to read in school and the stories they told one another. To make writing and literature more attractive and meaningful to his pupils, beginning in 1949 Brian wrote a series of children’s books reflecting the lives and duplicating the speech of New Zealand children. Which landed him, and not for the last time, in hot water. He was always a mischievous academic and relished the role. Brian was every bad boy’s best friend, a defender of children’s culture. As a result he was sometimes a controversial figure. For example, he did not condemn play fighting or view it as aggression, but as a form of struggle for identity, power, and status within a set of self-imposed rules.

Brian received New Zealand’s first PhD in Education in 1954. A Fulbright Scholarship allowed him to visit the U.K., which brought him in contact with Peter and Iona Opie, who like Brian, were busy collecting the playground games and chants of children, and to America, where he became acquainted with folklorists. He held academic positions at Bowling Green University (Ohio), Columbia University, and the University of Pennsylvania, where he was professor of both Folklore and of Developmental Psychology. After retiring from Penn, Brian and Shirley moved to Sarasota, FL, where he continued to write and meet with a steady stream of academic colleagues who visited.

In keeping with post-modern mores we can speak of the ambiguity of Brian Sutton-Smith, educator, developmental psychologist, anthropologist/folklorist, athlete, raconteur.

A lecture by Sutton-Smith was like a roller coaster ride, always exciting, and over before you could catch your breath, or before your cognitions could recover. I always had the feeling when hearing him lecture that he was talking mainly to himself, thinking aloud, and I was fortunate to bear witness. A typical lecture would include references to philosophy, biology and brain research, developmental and social psychology, anthropology and folklore, and it would be scattered with the often obscene stories, games, rhymes, and jokes of the school children whom he studied.

Students around the world are grateful to Brian for his support of their research on play. Often there are few or no others around with a similar interest and Brian proved an accessible, helpful and supportive voice for play research. Students from Asia, Africa, and throughout Europe and North America have said that without Brian’s supporting letter or encouraging comments they would not have been able to conduct their play research.

Brian was instrumental in forming a number of professional societies devoted to the study of children’s culture, including the International Toy Research Association, the Children’s Folklore Society, and The Association for the Study of Play. His support continues in the form of the Brian Sutton-Smith Library at The Strong National Museum of Play (Rochester NY) and an annual doctoral award in his name from the New Zealand Association for Research in Education.

Brian received many awards and honors, including a Lifetime Achievement award from TASP, and the BRIO Prize in 1993. Readers who want to learn more about the life of Brian can find autobiographical notes in the following publications:

A memorial service is scheduled to be held at the Strong National Museum of Play on 27 June 2015.